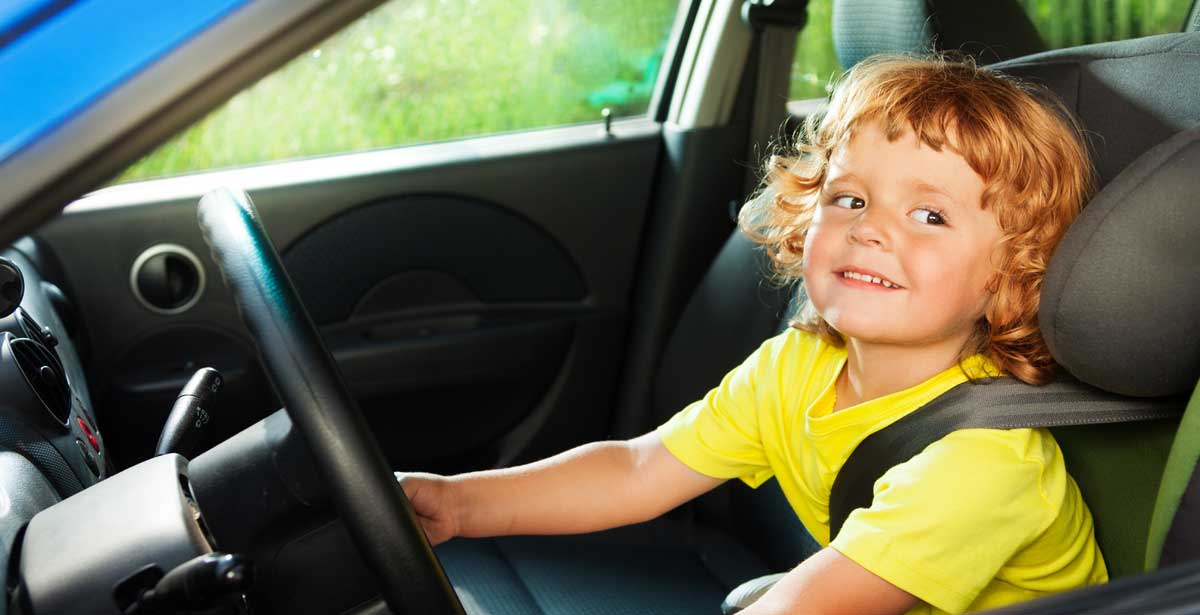 The Evolution of Child Car Seats in America – 1930s to Today

Obviously, it took a little while for car seat designs in the United States dedicated for children to catch up with the kind of energy and advancements put into cars themselves. Automobiles came on the scene shortly after the turn of the century in 1908 with the Ford Motor Company’s Model T, which was one of the first mass produced cars. Then it took nearly three decades, depending on who you source, for car seats for kids to even come on the scene.

It’s not surprising either that the main function of the first child car seats was specifically to help give little ones better visibility, rather than a safe passage. In fact, many of us who were kids and who grew up in the 60s and 70s don’t even remember using car seats, since they weren’t specifically required by law back then. One estimate we found on a Disney site claimed that “only half of all children under the age of four were riding in car seats” by 1984. Today, getting a properly sized child car seat is nearly as tedious as getting tailored for a new suit. Parents must now obviously take this task seriously, because it’s the law.

“Anymore, a parent can be arrested and charged with criminally negligent homicide for not providing their children with properly fitted, mandatory car safety seats, if the parent gets in a car accident and the child dies,” said personal injury lawyer Michael Maggiano of the law firm Maggiano, DiGirolamo & Lizzi P.C. “In fact, manufacturers of child car safety seats are held to incredible safety standards, because they can be held liable for defective products if they don’t.” 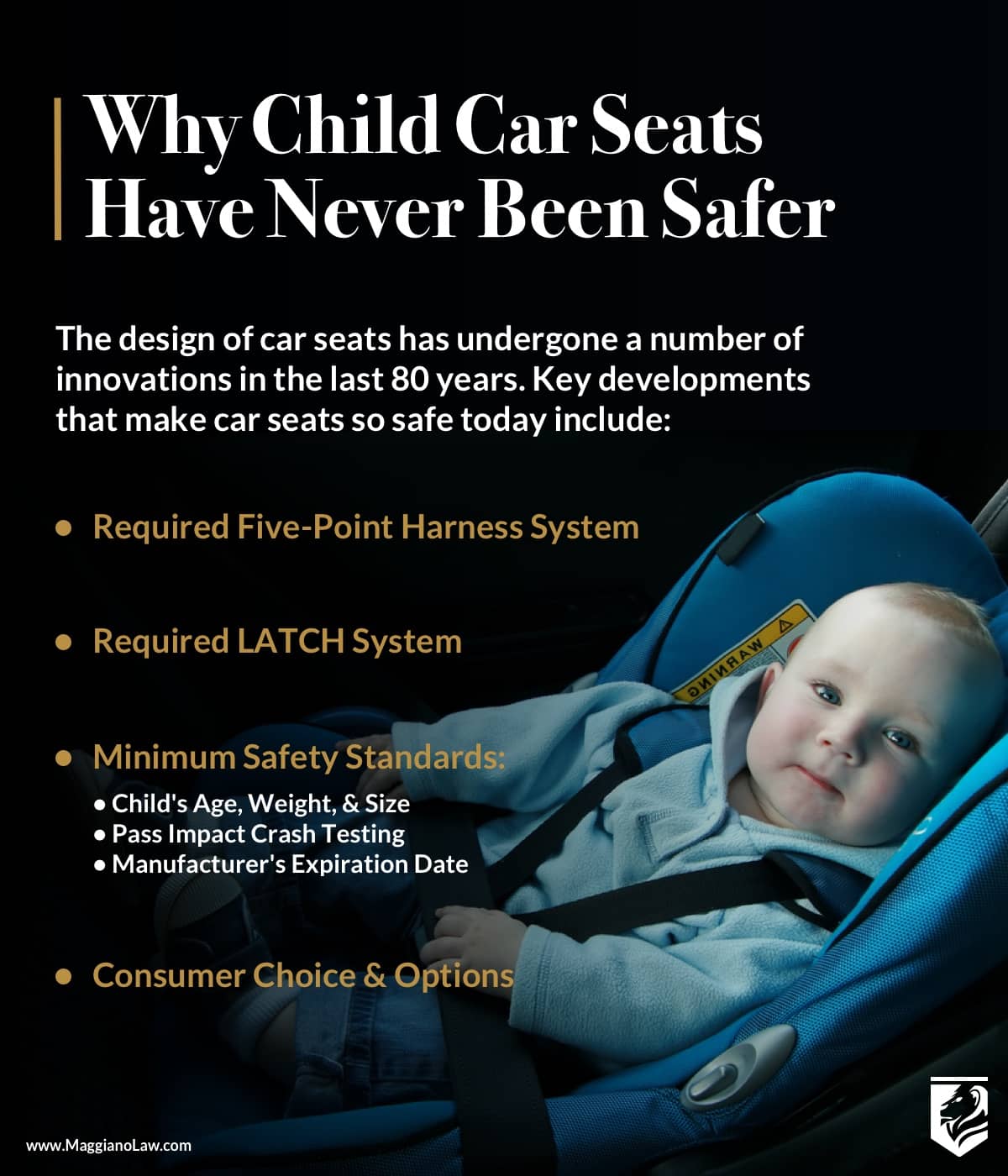 A Timeline of Child Occupant and Seat Safety Advancements

Thanks to the efforts of Safe Ride News editor Deborah D. Stewart, we now have a pretty accurate chronicling of the safety advancements made in the United States from 1965 to 2009. Some of the dates in the following list are approximate estimates, and several entries have been shortened or omitted here to make the list more manageable to read (for the full list, click here):

The very first child safety seats didn’t really provide any safety per se. Their main function was more for containment and preventing young ones from moving around in the motor vehicle cabin and to give them a boost up, so they could look out the windows to keep them occupied. It took nearly 30 years, well into the 1960s before child safety seats were actually considered safe devices, and began to undergo rigorous testing and manufacturing standards to meet federal laws and guidelines. Let’s take a quick glance back at some of these earlier child safety seats in the United States.

One of the earliest known mass produced child safety seats was manufactured by the Bunny Bear Company in 1933. The main functions provided by these seats were containment of the child and raising the child to a level so they could see out the vehicle window.

In the 1940s, child car safety seats were still fairly primitive and made with metal frames and canvas seats. They incorporated the same over-the-seat metal hooks as their predecessors.

Here’s one of the first advertisements for the Toidey Company’s “Ridin’Hi AUTOSEAT with TRAFFIC SAFETY BELT” from the 1950s. The ad claims the infant rides comfortably and safely thanks to the wedge anchors that secure it to the front or back seat. We doubt the seat met any kind of standards or underwent any kind of regulated testing. The fact remains, these child safety seats still not only fulfilled their purpose to contain the children, but they also sometimes doubled as high chairs on top of existing chairs inside the home as well.

In 1968, the Ford Motor Company came out with the “Tot-Guard,” which was a plastic-molded chair that had a cushion positioned to catch the child’s face in the event of a crash.

But, even by 1969 when Sears advertised this “Steel Travel Platform,” we can see that safety was still an ongoing process. Basically, the device was a steel plate covered by a vinyl foam pad that infants and toddlers could lay, sleep, or play on in the backset of the car.

Finally, in the 1970s the NHTSA began issuing child safety seat standards and regulations, such as all seats needing to be anchored by the vehicle’s seat belts, include a harness to restrain the child, but there was still no real impact crash testing at this point. GM also came out with their “Love Seats,” which for the first time came in multiple size models to choose from – one for infants and one for bigger children. Both of the Love Seat models secured with a regular car seat belt. The child’s model faced forward, while the infant model faced towards the rear.

By 1985, federal laws required children under certain ages to ride in a car safety seat. Here’s a picture of the Astroseat VI Car Seat believed to be made by the International Manufacturing Co., which featured a pull-down harness and protective upholstery to comfortably cradle the child.

The 1990s saw the advent of the ISOfix anchors also now known as the LATCH (Lower Anchors & Tether for Children) system with a top tether point and lower anchor points for increased stability.

Our current requirements call for a five-point harness system, which provides a snug fit, restrains the child, and combined with the LATCH system, child safety seats have never been safer. We also have state regulations in every state that have minimum standards and requirements for appropriate age, weight, and size of each child safety seat; pass impact crash testing; and manufacturer’s expiration date. All child safety car seats must meet the minimum safety standards, but many models go above and beyond what current laws require. As a matter of fact, the choices and options for our modern child car seats are so numerous now that the research and selection process can be even more daunting than buying an actual car. (Photo courtesy of Wikipedia)

All that remains for a modern child care safety seat to provide little or no protection is for the parent to be uninformed, for them to improperly attach the child safety seat in their vehicles, or fail to secure their child in a safety seat. Sadly, we still don’t have 100 percent child safety seat usage in the United States. In fact, the leading cause of death of young children today is a motor vehicle accident. And, what many parents don’t know is that they can lower the risk of harm to their child, if they just leave their children in their car safety seats a little longer than what is considered necessary. Thankfully, there’s still a plethora of child seat safety advocacy groups out there to ensure that more research and development continue to make better and safer child car seats, such as The Bridgespan Group, Safe Kids Worldwide, Safe Ride 4 Kids, Child Restraint Evaluation Program (CREP), and ADAC (the German Automobile Club) to name a few. If you need assistance having your child safety seat installed or the fit inspected by a professional, check with the Safe Kids Child Passenger Safety Technician in your area. How Car and Truck Accidents Are Different
October 20, 2021 What Does No-Fault Car Insurance Cover in New Jersey?
October 20, 2021